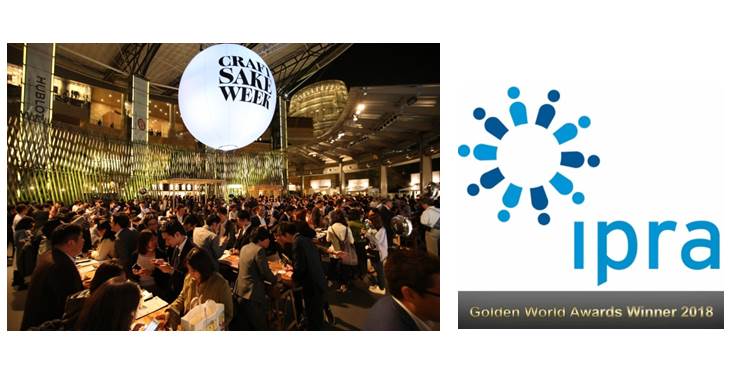 “CRAFT SAKE WEEK” is produced by Hidetoshi Nakata, bringing together the best sake brewers from all over Japan, based on the more than 300 that Nakata himself has visited.
http://craftsakeweek.com/

The first event was held in 2016 at Roppongi in Tokyo, and has since expanded to outlining regions such as Fukuoka and Sendai, attracting more and more visitors each year. In fact, the event draws visitors not only from within Japan, but other countries as well.
“CRAFT SAKE WEEK” was recognized for its efforts to expand the culture of Japanese to a multi-generational audience in both Japan and abroad.

Established in 1990, the Golden World Awards (GWA) entered its 28th year. This year, several hundred entries from various countries around the world vied for awards in 37 categories. “CRAFT SAKE WEEK” was chosen as one of 3 winners in the Arts and Entertainment category. The Grand Prix will be announced at the 2018 GWA Gala to be held in Barcelona, Spain on October 19.

■About the IPRA Golden World Awards
IPRA’s Golden World Awards for Excellence in Public Relations, established in 1990, celebrates each year the outstanding achievements of global communication professionals. The annual GWAs also bring together the profession and its practitioners and offer a platform for collegial exchange and learning.
https://www.ipra.org/golden-world-awards/winners/

SSU receives 2 awards at the Campaign Asia Pacific’s Agency of the Year 2020!